Gitanjali Sarangan and Sumathi Ramjee are founders of Snehadhara Foundation and course educators for API. Based on their experience of teaching arts based therapy to over 60 practitioners, both felt the need to design and implement a course that looks specifically at social inclusion through the Arts. The API course also enlists supervisors who join the course educators in supervising the direct beneficiary work component at host organisations. Guest lecturers and faculty from the creative arts therapies, psychology and sociology are invited to train and speak to students about their work. 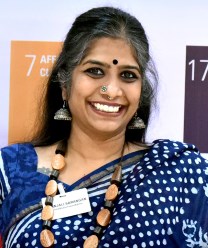 Gitanjali Sarangan is the head of teaching faculty for the API course. Gitanjali teaches music, community dance and movement, inclusion chapters and self-care guidance on the course.

Gitanjali Sarangan, Dr. Honoris Causa (Social Work, LADC Institute, USA), a TEDx speaker holds a Post-Graduation Diploma in Community Based Rehabilitation and holds a University rank for her Masters in Biochemistry. She is the Founder of Snehadhara Foundation, is an educationist, social innovator, entrepreneur and an Arts Based Therapy (ABT) Practitioner, an Arts Practices for Inclusion (API) Educator.

For over two decades Gitanjali been pioneering effective ways to bridge developmental deficits in education, and weave inclusion into the mainstream world. She has always been clear about wanting to spend time with children with special needs, learn of a world that does not discriminate, a people who love you for who you are and not what you do; who are not quick to judge, but rather quick to embrace. Years of working with children and adults, culminated in Snehadhara Foundation.

Snehadhara’s inception in 2012 was aimed at looking at innovatively using the Arts for learning. The pioneering attempt was to look at interventions with an integrated, holistic approach to address the various learning, therapeutic and social inclusion needs of children/adults across special needs groups. This has got her to pioneer the first ever Arts Practices for Inclusion programme in India. Over the past few years Snehadhara has worked with around 1000 children through direct and weekly interventions, with over 50000 children through indirect interventions in schools and other receptive environments and trained over 2000 professionals in about 400 organisations across the country. Over the past two years, Snehadhara’s international journey has carried its best practices to Canada, Argentina, Brazil, Qatar and Nepal.

Gitanjali has been conferred an honorary doctorate in Social Work (LADC, USA) and holds a Masters in Biochemistry along with a Post Graduate Diploma in Community Based Rehabilitation. Gitanjali Sarangan has a certificate in Psychological First Aid from Johns Hopkins University on Coursera. She also has a certificate in Social Psychology from Wesleyan University on Coursera. Born and educated in Mumbai, she has been a Lady Tata Memorial Scholarship Awardee and a University rank holder in Biochemistry. She has studied Applied Buddhist Psychology and Ethics from Pune University. Gitanjali is a trained Bharatanatyam dancer, and has trained in Hindustani and Carnatic Vocals. She has trained under Arthur Hull in Drum Circle Facilitation.

Gitanjali many awards and accolades to her credit and her work has been recognized in various platforms internationally.  To mention a few – Gitanjali is an awardee of the Millennium Alliance Global Award 2020 which takes her stellar innovation ‘Kala Samvaad – Arts Practices for Inclusion’ to Nepal. She has been awarded the Nation Builder Award by Rotary Literacy Mission. Gitanjali has been awarded the 2nd Creative Art Therapy Award 2020 in recognition of her outstanding contribution to the field of Art Therapy by the Sancheti Healthcare Academy as a recognition to the silent heroes who have done exemplary and exceptional work in the field of Creative Art Therapies.

She has been recognised by Global Ethics Forum and Indian Institute of Management, for working towards establishing an impartial and fair world. She has also spoken at the prestigious TEDx BITS Hyderabad on ‘The Goodness of Life’. Gitanjali was invited as a key speaker at the Conferencia Internacional – Por una Educacion que despliega las habilidades del Ser in Buenos Aires, 2019. Gitanjali has been an selected as an ACTIVATEE speaker at the 45th International Association for Experiential Education (AEE) Conference in Montreal in November 2017. Gitanjali Sarangan is the proud recipient of the Millennium Alliance Grant as a social innovator of one of the top five Innovations in the country for Education, 2017 by FICCI and in partnership with United States Agency for International Development (USAID) and the Technology Development Board, Department of Science and Technology, Government of India.

Gitanjali is the recipient of the NGO Leadership Awards 2017 as recognition of leaders who have contributed value & made a change as a strategic tool for sustainable growth. She has been awarded as one among the 50 Most Impactful Social Innovators (Global Listing) by the World CSR Congress and Awards. Gitanjali is also the recipient of the ‘Dr. Amarnath Annual Award for Inclusion’, 2016. She is one among two artists to be awarded the Artist’s Grant 2014 for the ‘Art in Education Program’ by the India Foundation for the Arts and the Artist’s Grant 2014 by India Foundation for the Arts. 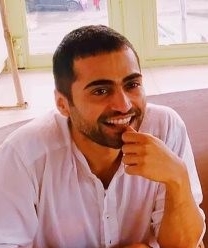 Arjun Khera, M.A., is a Drama and Movement Therapist (United Kingdom route) and Counsellor (Mental Health) at Parivarthan Counselling, Training and Research Centre. He is an external supervisor for the course and monitors quality control in programme delivery. 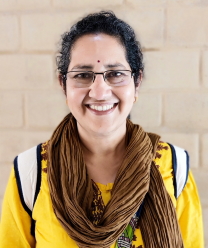 Sumathi Ramjee is an Arts Based Therapy practitioner and Arts Practices for Inclusion (API) Educator. She is the Joint Managing Trustee at Snehadhara Foundation. She has been the recipient of Pearson Teaching Award for Outstanding Contribution to Special Needs Children in the year 2012-2013 and Pearson Special Jury Award in the year 2012-2013. She has presented a poster on “Crossing Sensory Boundaries using Arts” in Delhi at the South Asia International Autism Conference 2015.

Sumathi is a First Class B. Tech in Electronics from Madras Institute of Technology, Chennai. After working as an assistant director with the Institute for Design and Electrical Measuring Instruments, Mumbai, her field diverged and she acquired a certificate in guidance and counselling from Christ College, Bangalore. Thereafter she followed to do a certification in Learning Disabilities, a PG Diploma in Creative Teaching and a Certificate course on Arts Based Therapy from WCCLF, Pune. Thereon Sumathi practised special education, language therapy and ABT at Deepika, Snehadhara, Bubbles Centre for Autism and ASHA in Bangalore. Her domains of specialisation include children with learning disabilities, autism, behavioural problems, developmental disabilities, slow learners. She has been the creative director at ASHA school annual day since 2009. Sumathi has trained facilitators during courses on Inclusive Education, Learning Disabilities and Caregivers, conducted Summer Camps for Mainstream children. She has led workshops in teaching aids, creative teaching, teaching methodologies, stress management, process of counselling, personal development, memory techniques and study skills, learning difficulties, multisensory teaching techniques, multiple intelligence, differentiated instruction, fun ways of teaching maths and social science. 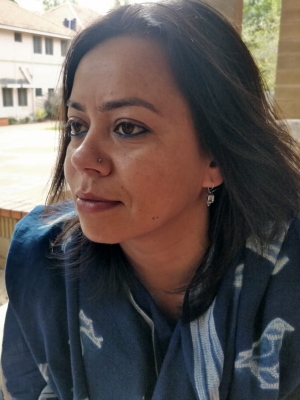 Madhu Shukla teaches the drama, play and psychosocial wellbeing modules for the API course. Madhu is a creative arts-based facilitator in Bangalore. She believes in the power of creative arts to live and lead with creativity, purpose and sense of service. She is a story practitioner and co-founder of “By the River”, a storytelling initiative started in 2014 that revels in taking the joy and power of stories to adults and communities

Since her post-graduation in acting from The National School of Drama, New Delhi, she has also explored the applications of theatre, storytelling and psychodrama practices as facilitator for personal and leadership transformation for over 15 years. She is a also a certified Psychodrama Practitioner. The co-founder of India’s first all-women’s improv group – The Adamant Eves, she is one of the early members of the improv community in Bangalore. While Madhu facilitates workshops for a range of diverse groups, she is drawn to working with adolescent girls, helping them transition into adulthood through creative arts-based processes and practices. 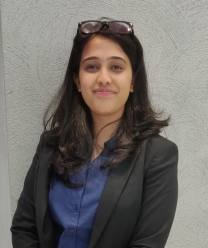 Yashaswini is currently working with Snehadhara Foundation in its Direct Care programme, enjoying her time to work with the population at the Nelamangala campus. A self-proclaimed research enthusiast, she has been conducting two research projects on ‘Experiencing Parenting and Community Living’ and ‘Activities of Daily Living of Children in a semi-residential setting’ with Vinati, the research wing of SF.

She has completed her Masters in Psychology from Ambedkar University Delhi, where she did her dissertation on ‘Narratives of Indian Parents of Children Diagnosed with Autism Spectrum Disorder’. She has been working with Light Up-Emotions Matter Foundation, facilitating Emotional Intelligence in residents of a juvenile home since 2018, and has been working on a research project to understand the impact of Social-Emotional Learning classrooms on children’s learning. Her internship experiences vary from content writing at BeepWeep, to clinical psychology ones at the Centre for Child and Adolescent Wellbeing and Moolchand Hospital.

Yashaswini also owns a home bakery and is passionate about her culinary skills. During her graduation, she was also actively involved in her college choreography dance society, and is trained in ballet, contemporary, chhau and Bharatnatyam dance forms. She aspires to hone a career in child psychology and open her organization offering affordable therapy and interventions to children with special needs.